With the release of Windows 10 organisations will have to look at what version of Internet Explorer will be used for internal and external services. As of now it looks like that Microsoft will ship IE11 as part of the new Windows release, mainly for backwards compatibility reason properly. Regardless, a decision might have been made to role out IE11 even for Windows 7/8.1 to get the benefit of longer support. As part of this deployment IT departments would look at customising and testing certain setting before making the update available to the entire user base. One would assume that just like it was done for IE10 there would be a template for IE11. However, even on Windows 8.1 or Windows Server 2012R2 only Internet Explorer 10 is available to choose from but not IE11. 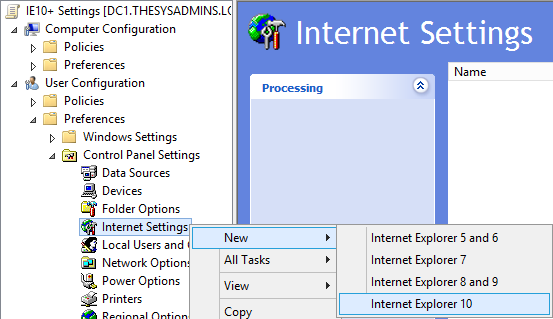 Microsoft has slightly changed is policy and with the IE10 option, Internet Explorer 10 AND greater will be covered, meaning that IE11 will pick up the settings/customisation you have specified for IE10, making IT administrator’s life somehow easier. However, as with every Internet Explorer version there are some new features and corresponding setting that will not be covered by the preferences like the Enterprise Mode. For those Microsoft has made a IE11 Administration Templates available that should be used to customise these features as required.